Born in Reading and a graduate of the Newcastle College of Performing Arts the first instrument that Pete learned to play was the guitar. However in his early teens he discovered the bass guitar and subsequently the Double Bass and these have become his favoured instruments for live performance and recording. 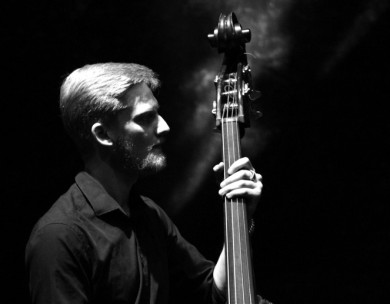 At the Derby Folk Festival - image by permission © Mark Steele

His professional career started when he was still at school and has enjoyed over decade of professional performance with many bands covering many genres: English and Irish folk music, jazz, particularly Gypsy Jazz, Bluegrass, R&B and Rock. He’s an old hand at performing at festivals particularly folk and Gypsy Jazz even headlining at the Gypsy Jazz Festival at Samois (France) with the virtuoso guitarist Gonzalo Bergara. Many of the bands he’s performed with can be seen in the various clips found in the media pages.

It would be foolish to assume that the Covid pandemic has gone for ever but 2022 is showing a much more positive outlook for the music industry and an air of normality is upon us. PM Warson’s R&B band successfully toured the Netherlands, Germany and Sweden, not to mention their appearances at the Night Owl in London and the Red Rooster Festival in Suffolk. A tour of Spain and Italy is planned for later in the year. Performances will promote their new album DIG DEEP REPEAT released at the beginning of May.

The Vanguards have completed recording their latest album too which will be released during the year, and following the great success of the recent couple of gigs London Django Collective had at Ronnie Scott’s (and elsewhere), gypsy jazz is as buoyant as ever. Benji Kirkpatrick and the Excess are playing at Purbeck Valley in the summer with maybe more in the pipeline

See the Discography page on this website for details and links for all the music mentioned above.